Posted on October 9, 2015 by David Wellington 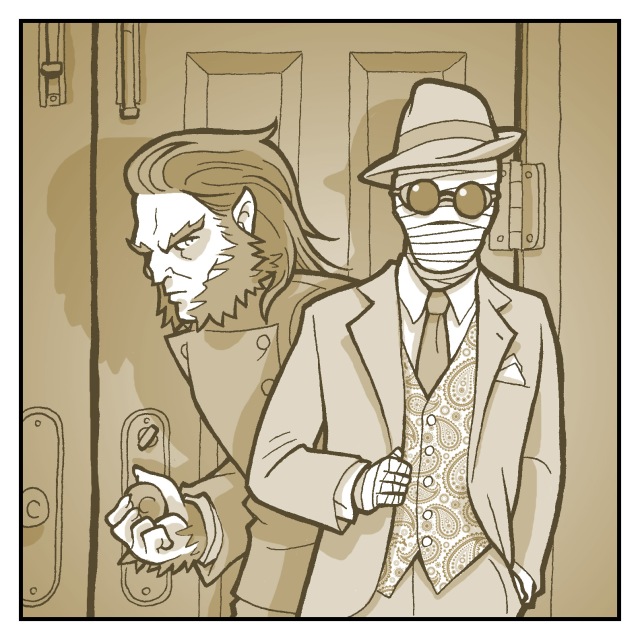 They drew stares as they entered the barroom.

Well, Reggie didn’t. By daylight the only real signs of his affliction were his shaggy whiskers and the equally thick patch of hair sticking out of either shirt cuff. Compared to some of the more opisthognathous specimens of common American farmhand on display in the room, he barely raised an eyebrow. No, it was the fact that standing next to him was a quite obvious Egyptian mummy. Even if said mummy wore a rabbit felt Trilby hat and an impeccably fitted paisley vest.

Neville still had his driving goggles on, despite the fact that he had neither been driving nor riding in an open car. The mummy had an absolute passion for accessories, seeing as he had so little face to work with. He claimed the goggles made him look jaunty, and that jauntiness would disarm the locals’ natural disinclination to trust newcomers.

Reggie, who was a devotee of the pulpier sort of literature, hoped that his employer might be mistaken for an invisible man out of Wells. Which on further consideration might not have been much of an improvement.

Elaborate description of the barroom seems unnecessary. Whoever you may be, dear reader, you’re sure to have encountered such a place at least once in your travels, unless you are a being from another world—in which case human metaphors and similes will avail little. Suffice to say that it might have been an English pub, or a drinking shop in far Marrakech and the occupants would have behaved the same. They were there for the consumption of spirits and not for the tasteful decorations.

The room’s denizens were about equally divided between locals and yokels, as such rooms commonly are. The distinction, of course, being that the locals had slightly cleaner footwear.

Reggie bellied up to the bar and ordered two beers. Asked for further particulars as to brand or variety he answered with a growl which seemed to be sufficient. He sat down hard on a stool, tipped his cap a little forward over his eyes, and commenced to the business at hand. Neville leaned up against the brass rail and nodded genially at anyone who cast an eye his way. Geniality, Neville held, being the most valuable commodity one can give away for free.

Reggie would have been happy just to drink and ignore his surroundings. Unfortunately, as has been previously established, he was a werewolf. The strongest sense a wolf possesses is smell. It is said a wolf can smell a caribou on the other side of a mountain, or track its prey’s trail days after the prey has moved on.

They also have fairly good hearing.

It was impossible for Reggie not to hear every conversation in the room. He had no choice but to drink in every syllable of the endless and quite detailed recounting of the current prices for corn, wheat, and apples, the difference between selling by the bushel and by the crate, how often a given field should be rotated, aerated, and sprayed for pests.

He heard a man and a woman deep in conversation about marriage, and how it wasn’t what it used to be, which seemed to suit both of them just fine.

He heard a bit of politics, for and against and mostly uninformed. He heard a little muttering of the kind that, left unlistened to, either leads to a good bout of shouting, shaken fists, and eventual apologies or, in some cases, murder. He heard the seethe and rumble of a people who, as wiser scholars than your present narrator have noted time and again, like very much to hear themselves talk.

And of course he heard people discussing the bar’s two newest patrons. As should be assumed. Most of such talk was short-lived.

“That there’s the Egyptian feller. New owner of Grimbly Hall.”

“What’s that, effete? You read that in a magazine?”

“Heard it in a picture. Means rich.”

“A swell, then. Funny how his face’s all wrapped up.”

“Mebbe that’s how they dress, over in Egyptian-land.”

“Odd, in the pictures it’s always whatchamacallems. Burnooses. And fezes.”

“Shouldn’t believe everything you see in pictures.”

For the sake of brevity let us say this conversation was typical, and carried out around a number of tables in the barroom, with slight variations. Most of said variations involving whether or not the new Egyptian swell needed any work done on his grounds, and how much one could gouge said swell on the price.

There was one conversation, though, that seemed anything but typical, and it definitely drew Reggie’s attention. Enough that he nudged Neville’s elbow. “Boss. Don’t look now,” he said, by which he meant that Neville should wait a few seconds, then definitely look where indicated. “Over by the door. See that guy with the funny hat?”

This being 1926, many of the men present wore hats indoors, and many of said hats were outlandish in design. Yet the one in question still stood out. It was a little too broad in the brim for the dictates of fashion, beaten and crumpled and stained with dust. Most saliently it looked as if it had been nicked by the claws of some very large creature. Close inspection might have found that the cuts in the brim had been made with scissors, but that’s giving a bit of the game away, so please forget it was mentioned.

The wearer of said hat slouched forward over his table, both hands flat on the beer-sodden surface. It made him look quite intent. He was interrogating a local farmer who had several empty glasses in front of him, and that particular smile that indicates he had paid for none of them.

The fellow in the odd hat wasn’t drinking.

Reggie whispered to his employer, “They’re talking about you.”

“Are they?” Neville responded, as if he couldn’t imagine why. “What are they saying?”

“He asked that farmer about the new master of Grimbly Hall. Then the farmer said ‘master? We don’t have masters in this country, thank you very much, this is a classless society.’ And then the guy in the funny hat apologized.”

“That’s not the juicy bit. So then, our friend, he asks, has the farmer seen or heard anything unusual around the hall. Like, say, weird lights in the woods, or bloodcurdling screams coming from inside the house.”

“We only just moved in yesterday,” Neville protested.

“What kind of an interest?”

“The kind we left New York to get away from.” Reggie laid one finger along the side of his nose. “Might be trouble, that one. Might bear a little visit in the middle of the night, a special kind of visit if you catch my drift, might—”

Neville pre-empted him by walking away from the bar. Reggie spun around on his stool and watched in horror as his employer strode over to the man in the funny hat and tapped him, quite pointedly, on the shoulder.

Author of horror, fantasy, and adventure novels.
View all posts by David Wellington →
This entry was posted in Episode One. Bookmark the permalink.